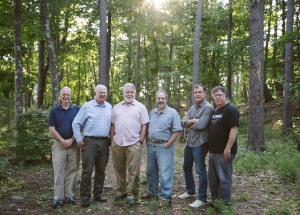 Members of The Rising Storm in Maine, August 2016, during a week of rehearsing for a performance at the class dance at their 50th high school reunion in June 2017, and of shooting a documentary about Calm Before, their 1967 album. (From left in photo: Todd Cohen, Charlie Rockwell, Tony Thompson, Richard Weinberg, Bob Cohan, Tom Scheft.) 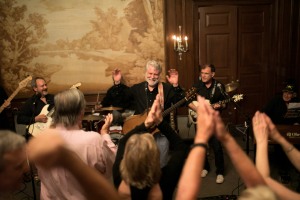 Tony, whose parents were from Minnesota, was born in and grew up outside Boston. He took piano lessons as a kid before picking up a guitar at age 14. Early in his boarding school career, Tony was known for his one-finger lead in “The McCoy.” But then his 20 dorm mates started a jug band and, after that, six of them formed a rock group, and the rest is “unhistory.” After Andover, Tony went to Harvard and, at age 24, moved to Washington, D.C. There he became a lawyer and got himself married to the beautiful Mady Gilson. They have three grown daughters and a grandson, and have begun spending a lot of time in Maine.

Bob grew up in Worcester, Mass. After graduating from the University of Pennsylvania, he formed Mackenzie & Cohan, a folk duo that played clubs and concerts in Washington, D.C., until he finished law school. He became a VISTA attorney, doing solo gigs to supplement his income, then worked as a Massachusetts Assistant Attorney General before starting a private practice. He got lucky, married Phuli, and has six great kids — Jessie, Alex, Emma, Tasha, Greg and Sofia. Now he’s a trial lawyer in Boston you hope you never need, and a fundraiser for Jewish National Fund. He’s still pickin’, mostly rags, bluegrass, old standards and early Stones. But he’ll always put down his D-28 and strap on his Les Paul for a Rising Storm revival.

Todd, a New Jersey native, studied English at the University of North Carolina at Chapel Hill, where he edited the student newspaper. He got a law degree, then worked for weekly and daily newspapers. For 20  years, he edited the Philanthropy Journal, a publication he started. Now he teaches writing at a local college. When Todd was growing up, only classical music and Broadway soundtracks were played at home. Then, at age eight, he heard an Elvis Presley song from a car driving past his house. He was hooked. Todd is married to Elaine Westarp; they live in Raleigh, N.C. He has three grown sons.

Charlie grew up on Long Island and Connecticut, and played in a rock band all four years at Middlebury College. He worked as a snow ski teacher, was commissioned as an Army Second Lieutenant, Armor, and found his wife, who, among other things, taught him to ride a motorcycle. He has spent his adult life teaching skiing — with a short stint as a tennis teacher — and racing off-road motorcycles and playing music. He is a retired land surveyor and chairs Vermont’s state board of land surveyors. Also retired as a Colonel in the Army National Guard, he works as a flight instructor and ski instructor, and volunteers as an Angel Flight pilot, carrying people with medical needs. Besides The Rising Storm, he plays locally with the Jim Gilmour Band, and owns seven Hammond organs with Leslie speakers. He and his wife live in Vermont and have two daughters and a new granddaughter.

Tom grew up in West Newton, Mass. His parents bought him his first drum set, which, he admits, was a big deal. Before that he practiced beats with an oversized wooden fork and spoon he filched from an extra salad-bowl set he found in the kitchen. He went to the University of North Carolina in Chapel Hill, studied to be a teacher and, after a brief stint in the public schools, joined the faculty at North Carolina Central University, where he now teaches in the School of Education. “The band saved me during high school,” he says. “It’s a wonderful thing to be part of a group whose ‘job’ is to create music and entertain.” He drums and sings backup in a band from Raleigh, N.C., that does a LOT of songs from the Sixties. He looks forward to the times when The Rising Storm can get together. His son is a terrific drummer and singer.

Richard was born in Boston. His father worked in the motion-picture industry and his mother was involved in social action and philanthropy. After Harvard and the Johns Hopkins School of Medicine, his medical career took him to the University of Chicago, University of Texas-Houston and Wake Forest University, where he is a professor of internal medicine and gastroenterology. Influencing his guitar-playing have been Pete Townsend, Walter Becker, Steve Lukather and Lee Ritenour. His funniest Rising Storm memory is the “Toilet Boys guitar solo” (don’t ask). His love for The Rising Storm? “These are my brothers for life.”