The Rising Storm is a rock band that has been keeping the beat for over 50 years.

Calm Before, the album its six members recorded in 1967 while seniors in high school, is one of the most prized garage-band albums of all time. In 2016, a copy sold for $6,500.

The Storm — all six members still are active — has performed in London, Rotterdam, Hoboken and Boston, where they have played multiple times, including a set in 2014 during the Pipeline! concert series celebrating 50 years of Boston rock.

The Washington Post called the Storm “the most famous utterly obscure rock band in America.”

The All Music Guide to Rock ‘N’ Roll described Calm Before as “one of the rarest and most respected garage band albums.” 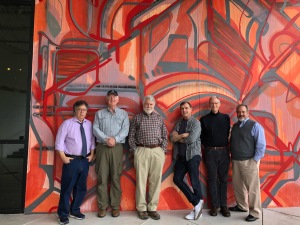 Richie Unterberger devoted a chapter to the band in his book, Unknown Legends of Rock ‘n’ Roll.

The band was the focus of a July 2017 feature story in The New York Times.

In January 2018, Sundazed Music reissued Calm Before on vinyl and in CD format. It also is available on Apple Music.

And calm before… the rising storm, a 30-minute documentary movie about The Rising Storm and Calm Before, has been shown at seven film festivals, won a top award at five of them, and was named one of the 10 best rock documentaries of 2018 by rock writer Richie Unterberger.